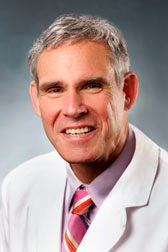 Eric Topol, an outspoken San Diego cardiologist who has been pressing for the use of wireless mobile devices and the sequencing of people’s genomes to improve patient care, has been named the most influential physician executive in the nation by a pair of industry magazines.

Topol, chief academic officer of Scripps Health, was placed at the top of a list of 50 honorees that includes Thomas Frieden, director of the U.S Centers for Disease Control and Prevention in Atlanta, and Margaret Hamburg, the commissioner of the U.S. Food and Drug Administration. The 57-year-old Topol was selected for the honor by Modern Healthcare magazine and a sister publication, Modern Physician. Modern Healthcare said the selection was based heavily on Topol’s new book, “The Creative Destruction of Medicine: How the Digital Revolution Will Create Better Health Care”….

Dr. Topol and his 975 co-authors were awarded the Ig Nobel Prize in literature, in 1993, for publishing a medical research paper which has one hundred times as many authors as pages. The study was published in The New England Journal of Medicine, vol. 329, no. 10, September 2, 1993, pp. 673-82. The authors are from the following countries: Australia, Belgium, Canada, France, Germany, Ireland, Israel, Luxembourg, The Netherlands, New Zealand, Poland, Spain, Switzerland, United Kingdom, United States.

Dr. Marcia Angell, the journal’s executive editor (and later, its editor-in-chief), attended the Ig Nobel ceremony, and accepted custody of the prize on behalf of the authors. (It was speculated that the authors themselves did not attend because they were unable to agree on the wording of an acceptance speech.)