The numbers of Steller sea lions (Eumetopias jubatus) in the Gulf of Alaska and the Aleutian Islands have been mysteriously dropping since at least 1970. Various theories for the decline have been put forward, including increased predation by orcas, effects of disease and/or contaminants, shooting by fishermen etc etc.

Another theory has recently surfaced though. The idea of a group of researchers at the Marine Mammal Research Unit, Fisheries Centre, the University of British Columbia, Vancouver, Canada, is that sea lions have developed a very bad habit. They eat junk-food – where the junk-food in question is Pollock.
The team’s paper ‘Pollock and the decline of Steller sea lions: testing the junk-food hypothesis‘ is published in the Canadian Journal of Zoology, 78:(7) pp. 1243-1250.

Subsidiary Note: ‘Never mind the Pollock’ :
Pollock might not only be considered junk-food for sea lions, there are some who feel that Pollock is disdained as a human food too. Take for example the UK supermarket chain of Sainsbury’s, which tried in 2009 to persuade UK shoppers to refrain from calling it ‘Pollock’ and call it ‘Colin’ instead. Here’s the official view [part of which is reproduced in the image below] from the UK government’s Centre for Environment, Fisheries & Aquaculture Science, which asks : “Are we really too timid to say pollock?” 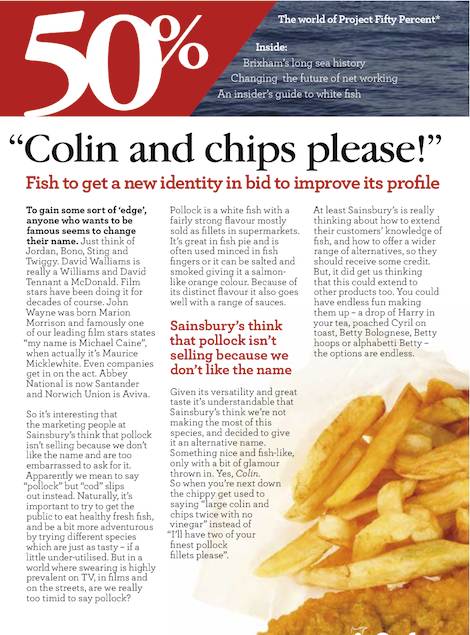