Andy Adamatzky, an innovative writer of scientific reports [see our report about one of his earlier works], has joined with collaborators from many nations to do a new report about the apparently intelligent behavior of slime molds. He has published several papers that derive from the (double!) Ig Nobel Prize winning research of  Toshiyuki Nakagaki and Nakagaki’s team. The new paper is:

“We analyse the results of our experimental laboratory approximation of motorways networks with slime mould Physarum polycephalum. Motorway networks of fourteen geographical areas are considered: Australia, Africa, Belgium, Brazil, Canada, China, Germany, Iberia, Italy, Malaysia, Mexico, The Netherlands, UK, USA. For each geographical entity we represented major urban areas by oat flakes and inoculated the slime mould in a capital. After slime mould spanned all urban areas with a network of its protoplasmic tubes we extracted a generalised Physarum graph from the network and compared the graphs with an abstract motorway graph using most common measures. The measures employed are the number of independent cycles, cohesion, shortest paths lengths, diameter, the Harary index and the Randic index. We obtained a series of intriguing results, and found that the slime mould approximates best of all the motorway graphs of Belgium, Canada and China, and that for all entities studied the best match between Physarum and motorway graphs is detected by the Randic index (molecular branching index).”

Behold an image from the paper: 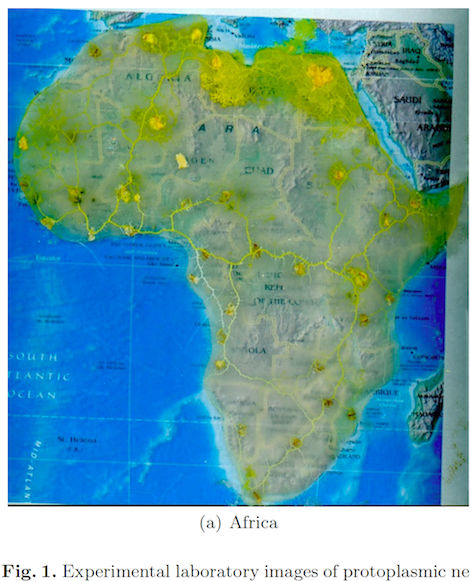 (Thanks to investigator Vaughn Tan for bringing this to our attention.)