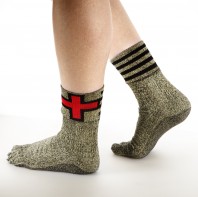 A product called The Swiss Protection Sock appears to extend the principle that was honored by the 2010 Ig Nobel Prize in public health. That prize was awarded to

Lianne Parkin, Sheila Williams, and Patricia Priest of the University of Otago, New Zealand, for demonstrating that, on icy footpaths in wintertime, people slip and fall less often if they wear socks on the outside of their shoes. They documented their work, in the study “Preventing Winter Falls: A Randomised Controlled Trial of a Novel Intervention,” Lianne Parkin, Sheila Williams, and Patricia Priest, New Zealand Medical Journal. vol. 122, no, 1298, July 3, 2009, pp. 31-8.

Here’s a promotional video for the Swiss sock:

(Thanks to investigator Lara Buzdula for bringing this to our attention.)