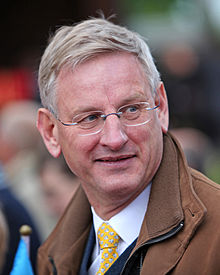 Maggie Koerth-Baker of Boing-Boing interviewed several journalists at the AAAS Annual Meeting last week in Vancouver, about what they had learned at the meeting. Here’s me, blabbing on about a new little chapter in the story of how fish farts almost caused a diplomatic crisis between Russia and Sweden, and might cause a new little kerfuffle in Sweden.

The Swedish scientists who identified  the herring farts (from Stockholm harbor hydrophone recordings given them by the Swedish government) were awarded the 2004 Ig Nobel Prize in biology. Those Swedish scientists shared the prize with a team from Canada and Scotland who independently made a similar discovery about herring farts. The new (to me) part is the continuing insistence of Sweden’s then-Prime Minister (and current Minister for Foreign Affairs) Carl Bildt [pictured here] that the scientists were wrong—that the herring farts were not herring farts, but were Russian submarines sneaking around in Stockholm harbor.

BONUS: On Saturday, March 24, Magnus Wahlberg and Håkan Westerberg, the two Swedish marine scientists, and I and Magnus (“Chickens Prefer Beautiful Humans) Enquist, another Swedish Ig Nobel Prize winner, will do a public talk in Stockholm. If you are in the neighborhood, please join us.