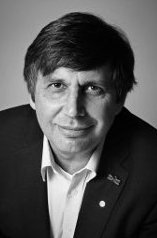 From tinkering on the fringes to Nobel glory

… You have worked in many countries. How does the UK compare?

I spent four years in the UK from 1990, before returning in 2000. I like it because it’s a very natural environment. I found the US, the Netherlands and practically everywhere else I have worked a bit artificial and occasionally even hypocritical. There’s an expectation that you have to smile and behave in a certain manner. Despite the differences between Russia, where I was born, and the UK, there is some common sense of humour. British humour – natural and self-deprecating – is very appealing to me.

You won an Ig Nobel award in 2000 for demonstrating an unusual magnetic effect using a levitating frog. Did you know it would generate such a buzz?

It was always the intention. We wanted to get the message across that everything around us is magnetic and needed to find an image with general appeal. We considered putting spiders, lizards, cockroaches and hamsters into the field. A hamster would have done nicely, but the hole into the apparatus was too small, so we ended up with a tiny frog we found in the biology department.