The Los Angeles Times on January 8, 1998, bid farewell to psychotherapy’s most visible practitioner:

E. Paul Bindrim, the controversial self-styled father of nude psychotherapy who won a landmark libel suit over a novel he claimed deprecated his techniques, has died. He was 77.  Bindrim died Dec. 17 at Cedars-Sinai Medical Center in Los Angeles, his wife, Mary, said Tuesday. She plans to scatter his ashes at sea Jan. 17.

In 1967, Bindrim conducted his first nude workshop in Deer Park, Calif., and almost got thrown out of the American Psychological Assn. 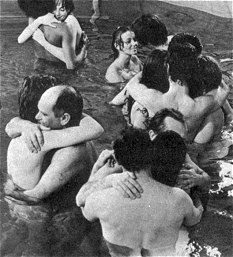 But he persevered, and two years later Gwen Davis Mitchell, a novelist best known for “The Pretenders,” asked to attend one of his swimming pool therapy sessions for research.

Bindrim’s practice consisted of placing several people in the warm pool for long sessions of touching and massaging, talking and sometimes shouting or acting out rage….