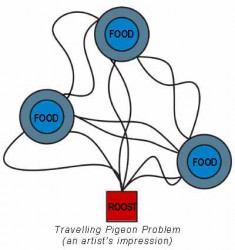 In the award-winning children’s book ‘Don’t let the pigeon drive the bus’ by Mo Willems, (Hyperion Books for Children, 2003) a persistent pigeon ‘asks, pleads, cajoles, wheedles, connives, negotiates, demands and uses emotional blackmail in attempts to get behind the wheel’. The bus driver is decidedly reluctant to let the pigeon drive. But why?

– explain researchers Brett Gibson, Matthew Wilkinson and Debbie Kelly  at the department of psychology, University of New Hampshire, US. The team are commenting on the scenario because they have experimentally determined that, along with humans, pigeons are able to make reasonably accurate predictions about solutions to simple examples of the notoriously tricky Travelling Salesperson Problem (TSP)

“We presented pigeons in a One-way and Round-Trip group with TSPs that included two or three destinations (feeders) in a laboratory environment. The pigeons departed a start location, traveled to each feeder once before returning to a final destination. Pigeons weighed the proximity of the next location heavily, but appeared to plan ahead multiple steps when the travel costs for inefficient behavior appeared to increase. The results provide clear and strong evidence that animals other than primates are capable of planning sophisticated travel routes.”

The resulting paper:‘Let the pigeon drive the bus: pigeons can plan future routes in a room’ is currently in press at the journal Animal Cognition.