From Leeds and London comes a new medical horror story: 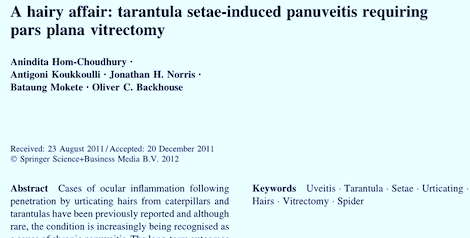 “Cases of ocular inflammation following penetration by urticating hairs from caterpillars and tarantulas have been previously reported and although rare, the condition is increasingly being recognised as a cause of chronic panuveitis. The long-term outcomes and prognosis of this condition are not well known. This article describes a case of chronic panuveitis as a result of ocular penetration by tarantula setae, and its challenging management that ultimately required pars plana vitrectomy.

“Interventional case report: A 29-year-old male presented with chronic panuveitis secondary to tarantula-hair penetration. Initial management with mechanical removal of hairs from the cornea and intensive topical steroid therapy for 18 months did not adequately control his symptoms. Pars plana vitrectomy was carried out and at 6-month follow-up the patient was symptom-free without any pharmacological therapy.”

(Thanks to investigator Adrian Smith for bringing this to our attention.)

BONUS: ” Tarantula Hairs as Corneal Foreign Bodies“, a report from Salt Lake City, in which:

A 16-year-old male presented with a 6-week history of right ocular irritation that began after letting his pet tarantula crawl on his face. Slit-lamp examination of the right eye revealed the presence of approximately 16 dark foreign bodies that had the appearance of small hairs. The foreign bodies were removed from the nasal region of the right cornea using Jewelers forceps, and the patient was prescribed a combination neomycin, polymyxin B, and dexamethasone ointment (Maxitrol®), given 4 times per day.