New technology could both (1) improve a now-awkward medical procedure and (2) inspire a more focused re-make of a beloved science fiction movie. The Boston Globe reports:

To see inside the digestive system, doctors have to thread a scope up or down – potentially doing damage along the way – or get their patients to swallow a capsule that tumbles through, uncontrolled, snapping random pictures. Researchers at Brigham and Women’s Hospital are now developing a “swimming capsule’’ [pictured here] that they hope will combine the best of both approaches: the control of the endoscope with the safety and ease of a pill…. 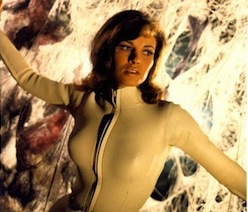 A diplomat is nearly assassinated. In order to save him, a submarine is shrunken to microscopic size and injected into his blood stream with a small crew.

Rumor has it that a new version of “Fantastic Voyage” is in the works, though reports are unclear as to whether the new voyage would be primarily colonoscopic.

Here’s the promotional trailer for the original movie:

BONUS: If this conjunction of technology and colon-probing strikes you as completely unthinkable, take a look at a September 29, 2009 report in The Register. The headline reads “Suicide bum-blast bombing startles Saudi prince“.