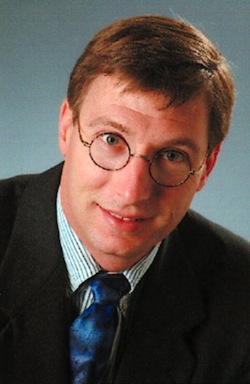 In 1998 David M. Schultz [pictured here], then at the National Severe Storms Laboratory, Norman, Oklahoma, USA (and now at the University of Manchester, UK)  published an article called “Does It Rain More Often on Weekends?” (Annals of Improbable Research, vol. 4, no. 2) . Schultz concluded that:

there is perhaps some validity to the hypothesis that certain locations favor weekday over weekend precipitation, and vice versa. We have been asked if our findings are statistically significant. That question is beyond the scope of this investigation, and far beyond the scope of interest of the reader.

Now, thirteen years later, comes a study about the weekend occurrence (and non-occurrence) of other types of storms:

This study shows for the first time statistical evidence that when anthropogenic aerosols over the eastern United States during summertime are at their weekly mid-week peak, tornado and hailstorm activity there is also near its weekly maximum. The weekly cycle in summertime storm activity for 1995–2009 was found to be statistically significant and unlikely to be due to natural variability. It correlates well with previously observed weekly cycles of other measures of storm activity. The pattern of variability supports the hypothesis that air pollution aerosols invigorate deep convective clouds in a moist, unstable atmosphere, to the extent of inducing production of large hailstones and tornados.

(Thanks to investigator Toni Alvarez for bringing this to our attention.)