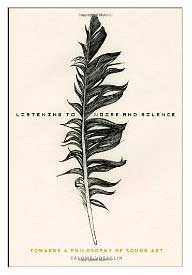 What do a coffee machine, a mosquito, a fridge, gastric ‘flu and silence have in common?
One answer is sounds. Or lack thereof. And all have been researched by Dr. Salomé Voegelin who is Sound Arts Course Leader, and Member of CRiSAP at the London College of Communication, University of the Arts London. Dr. Voegelin has performed an in-depth investigation into noise and silence.

In her book Listening to Noise and Silence: towards a Philosophy of Sound Art, (Continuum, NY, 2010.) the author points out that, in the Heideggerian
sense at least, a sound – or a ‘sonic object’ – might be considered a Dingbegriff – a Thing [capital intentional]

“It is ‘das Insichruhende’ as Dinghaftes, the in itself resting thing-ness of the Thing that is, the formed fabric of the Thing as it is open to and perceived though an astonished sensorial engagement.”

And draws attention to further possibilities –

“I take Heidegger’s focus on the elemental notion of the Thing in its Dingheit, thinging, and foreground the generative possibility of such a thinging thing …”

As mentioned above, the author has also written (via her blog) on the sounds (or lack of sounds) involved with :

Substantial excerpts from the book may be found here: