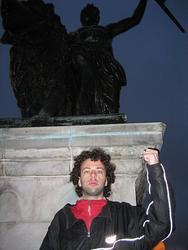 A British-American team of scientists [co-author Mason Porter is pictured here] has produced a study called A Mathematical Model for the Dynamics and Synchronisation of Cows. They were driven partly by the intellectual challenge, and at least a little by an EU council directive, which mandates “that cattle housed in groups should be given sufficient space so that they can all lie down simultaneously”.

Their key insight, the team says, was to realise “it is biologically plausible to view [cattle] as oscillators … During the first stage (standing/feeding), they stand up to graze but they strongly prefer to lie down and ‘ruminate’ or chew the cud for the second stage (lying/ruminating). They thus oscillate between two stages.” …

BONUS: The following video has little to do with this research. But it does, briefly, involve a cow, or at least a bull:

BONUS: An unrelated example of oscillation: