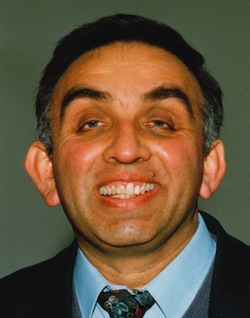 Psychiatrist calls for lithium to be added to water

A consultant psychiatrist last night called on Government to add lithium salts to the public water supply in a bid to lower the suicide rate and depression among the general population.

At a mental health forum on “Depression in Rural Ireland” in Ennistymon, Co Clare, Dr Moosajee Bhamjee [pictured here] said that “there is growing scientific evidence that adding trace amounts of the drug lithium to a water supply can lower rates of suicide and depression”.

Lithium is used by doctors as a mood stabiliser in the treatment for depression.

Dr Bhamjee said: “A recent article in the British Journal of Psychiatry found the beneficial uses of lithium when it was added to the water supply in parts of Texas….

(Thanks to investigator Sheila Boyle for bringing this to our attention.)

BONUS: “Lithium levels in drinking water and risk of suicide“, the article to which Dr. B. alludes.