This medical study describes a new use for the old-fashioned amusement devices called dominoes:

Aim. We report three cases of Hispanic men incarcerated in separate southwest United States prisons who utilized a similar technique to insert foreign bodies fabricated out of dominos into the subcutaneous tissues of the penis. 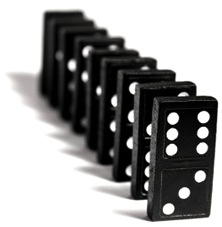 Methods. Details of the three cases were retrospectively reviewed.

Results. In each case, an incarcerated Hispanic male or fellow inmate filed a domino into a unique shape for placement under the penile skin. Utilizing the tip of a ballpoint pen or a sharpened shard of plastic to create a puncture wound, each man inserted the domino fragment into the subcutaneous tissue of the penis. All three men presented with infection requiring operative removal.Conclusions. Incarcerated males put themselves at risk for injury and infection when attempting penile enhancement with improvised equipment.

BONUS: A historic domino fragment from a saloon.