Professor Satyan Devadoss solved the central chalk problem. Devadoss describes it, on the “Math and Statistics at Williams College” site: 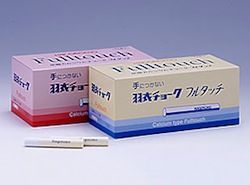 There have been rumors about a dream chalk, a chalk so powerful that mathematics practically writes itself; a chalk so amazing that no incorrect proof can be written using this chalk.  I can finally say, after months of pursuit, that such a chalk indeed exists.  It is called the Hagoromo Fulltouch Chalk.

For those lucky few who have used it, it can truly be called the Michael Jordan of chalk, the Rolls Royce of chalk.  It is made in Japan, and is a bit larger than the classical American chalk. Moreover, it comes with a wonderful coating which protects the user from chalky hands.  Once you’ve used it, there is no going back.

Unfortunately, it is not cheap.