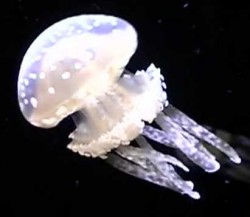 Those who have never seen photographic images of Orgone Energy Functions may be interested to see a set which are currently provided online by psychiatrist Alberto Foglia M.D. of Lugano-Paradiso, Switzerland. Take, for example Photographic Images of Orgone Energy Functions III: The Jellyfish (The Journal of Orgonomy,Vol. 43 No. 1).
The orgastic potential of the jellyfish was first noted by Wilhelm Reich in 1945, and Dr Foglia expands on the original idea with an eight page photo-illustrated essay touching on erogenous zones, orgastic convulsions, and of course the dance-like movements of jellyfish. [click image for a jellyfish video]
Dr. Foglia also provides Photographic Images of Orgone Energy Functions for The Worm and The Ameba (both papers also previously published in The Journal of Orgonomy)
Note : The Journal of Orgonomy is a publication of The American College of Orgonomy, P.O. Box 490, Princeton, New Jersey.