The Wall Street Journal featured, on two consecutive days, the work of two Ig Nobel Prize winners. You may see this as a study in contrasts. 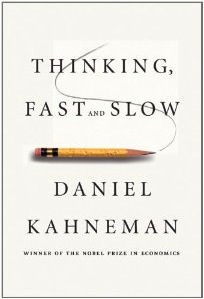 On October 22, 2011 the Journal published a review by Chris Chabris, of the new book [pictured here] by Nobel laureate Daniel Kahneman. Professor Chabris and Dan Simons shared the 2004 Ig Nobel Prize in psychology for demonstrating that when people pay close attention to something, it’s all too easy to overlook anything else — even a woman in a gorilla suit. Both Chabris and Simons received great acclaim for their gorilla experiment; both have gone on to do additional research that drew widespread admiration and additional acclaim. [BONUS: a long passage from Kahneman’s book]

The previous day, the Journal published a where-are-they-now report about Dennis Koslowski, the former chief executive officer of Tyco. Mr. Kozlowski was one of a large number of temporarily-high achievers who shared the 2002 Ig Nobel Prize in economics. That prize was awarded to the executives, corporate directors, and auditors of