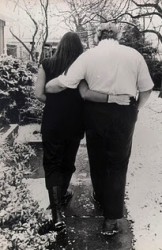 The memorial for Jerry Lettvin — a full day of stories, scientific talks, and maybe even some performances — happens this Sunday (September 25), at MIT, in [building/room] 32-123, starting at 9:00 am. The photo here shows Maggie and Jerry, way back when. Maggie will be at the memorial.

In case you’ve never seen it, here’s Jerry‘s most famous paper [as a downloadable PDF]: “What the Frog’s Eye Tells the Frog’s Brain,” written with Humberto Maturana, Warren McCullough, and Walter Pitts, published in 1959. It opened a giant door in research on brains — human brains as well as frog brains. Here’s a passage from near the end of it:

What are the consequences of this work? Fundamentally, it shows that the eye speaks to the brain in a language already highly organized and interpreted, instead of transmitting some more or less accurate copy of the distribution of light on the receptors. As a crude analogy, suppose we have a man watching the clouds and reporting them to a weather station. If he is using a code, and one can see his portion of the sky too, then it is not difficult to find out what he is saying. It is certainly true that he is watching a distribution of light; nevertheless, local variations of light are not the terms in which he speaks nor the terms in which he is best understood. Indeed, if his vocabulary is restricted to types of things that he sees in the sky, trying to find his language by using flashes of light as stimuli will certainly fail.

Now, since the purpose of a frog’s vision is to get him food and allow him to evade predators no matter how bright or dim it is about him, it is not enough to know the reaction of his visual system to points of light. To get useful records from individual receptors (the rods and cones), assuming that they operate independently and under no reflex control, this stimulus may be adequate. But when one inspects responses that are a few nervous transformations removed from the receptors, as in the optic nerve, that same choice of stimulus is difficult to defend. It is equivalent to assuming that all of the interpretation is done further on in the nervous system. But, as we have seen, this is false.

Of course, that’s just one side of Jerry. There are many, many, many others, including Jerry and Walter’s first published paper, a hoax that got taken seriously, and this televised duel with Timothy Leary (who, you might not realize from watching the video, was one of Jerry’s many good friends). Jerry arrives a little more than half-way into the video: