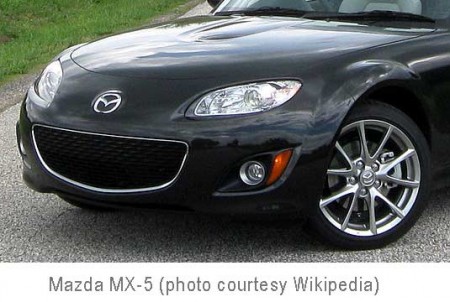 A group of European researchers have asked the question : “What Kind of Face Sits Well on a Car’s Frontal Appearance?”. And to answer, the team (from the University of St. Gallen, Switzerland and the University of Bonn, Germany) employed an fMRI machine to scan the brains of (male*) experimental participants who were looking at pictures of cars’ front ends.

“Because car fronts activate the reward circuit in a similar way as female faces do, it is unlikely that our exclusively male participants are willed to use a car as a way to express themselves. In contrast, as men like female faces better than male faces, are longer looking to them and appreciate them according to their attractiveness (Levy et al. 2008), the similarity in processing indicates that car fronts cause a feeling of reward directly due to attractiveness and not mediated by semantic associations.“

As a result of the study the team have a tip for car designers :

“Our findings allow the recommendation to give the grille a friendly expression whereas the headlights should rather look aggressive.”

“EMOTIONAL ANTHROPOMORPHISM: WHAT KIND OF FACE SITS WELL ON A CAR’S FRONTAL APPEARANCE?” is published in Advances in Consumer Research (38), 1. 2011. (more info. here in .doc format)

*Note : Only male participants took part – a decision based on previous research from the same team which had determined that “Car Faces are Female.”