One of the best things about the Ig Nobel Prize ceremony is that lots of people get to meet lots of people. This blurry photo, taken moments after the 2010 ceremony, shows Julia Rios, one of the Ig Nobel minordomos (the people who keep things moving smoothly and sylishly on stage) connecting with a returning Ig Nobel Prize winner. That winner is none other than Dr. Yoshiro Nakamats, Japan’s (and perhaps the world’s) most prolific inventor. You can see Julia in action again at the upcoming 2011 Ig Nobel Prize ceremony, on September 29. 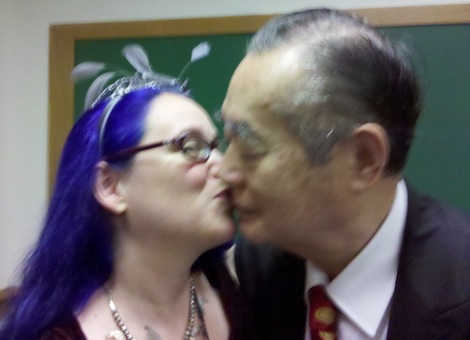 Dr. Nakamats was awarded the 2005 Ig Nobel Prize for photographing and retrospectively analyzing every meal he has consumed during a period of 34 years (now 40 years, and counting). He is the subject of a recent documentary film: