Research on how spaghetti breaks (research that was honored with the 2006 Ig Nobel Prize in physics) had an influence on modern computer-aided drawing tools. Melanie Kaplan in SmartPlanet reports: 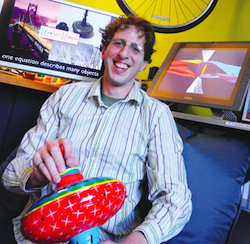 During a recent conversation with Eitan Grinspun [pictured, spaghetti-less, here], I found myself wondering whether he is more obsessed with food or with movement. But then I realized it doesn’t matter, because his detailed explanations of how easily spaghetti breaks or how honey drips are equally—and endlessly—fascinating. Grinspun is an associate professor of computer science at Columbia Engineering…

[GRINSPUN:] “I was giving a course at SIGGRAPH (the Association for Computing Machinery’s Special Interest Group on Computer Graphics and Interactive Techniques), and at the end of the course Basile Audoly introduced himself and suggested we work on a project together. He showed me the repertoire of things he’d done in the past on the physics and theory side, including the tearing of plastic sheets and breaking spaghetti. He was saying one of the big unsolved problems (he won an Ig Nobel prize for this) is that when you break spaghetti, it always breaks in more than one piece. So he was curious in one side, I was curious in the other side. 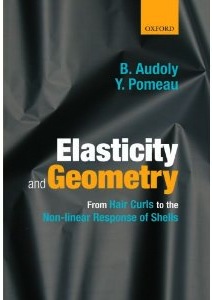 “In 2007 I ended up flying Basil and a geometer from Germany to Columbia, and we spent a few weeks together looking at making flexible strands move. When we had this working, by total chance, we got a call from Adobe.

A new research group said they wanted to pursue a project to develop a physical paint brush that bends and moves. I said, ‘You’ve got to be kidding me,’ because we just, in hindsight, had finished developing a bristle. So that was a successful collaboration. You can see it on Adobe Illustrator 5 and Adobe Paint Brush 5, and you can play with the brush.”

BONUS: Basile Audoly and a colleague have a new book out: Elasticity and Geometry: From hair curls to the nonlinear response of shells.