PHYSICS PRIZE: Lianne Parkin, Sheila Williams, and Patricia Priest of the University of Otago, New Zealand, for demonstrating that, on icy footpaths in wintertime, people slip and fall less often if they wear socks on the outside of their shoes.
REFERENCE: “Preventing Winter Falls: A Randomised Controlled Trial of a Novel Intervention,” Lianne Parkin, Sheila Williams, and Patricia Priest, New Zealand Medical Journal. vol. 122, no, 1298, July 3, 2009, pp. 31-8.

“I know this is silly to write but — I was born in Macedonia, and grew up in its capital Skopje. We get very snowy winters with lots of ice on the streets and sidewalks. I remember elderly people would often wear socks over their shoes and boots in the winter, so they don’t slip on the ice (wool socks are better, btw :-) tested on more than 30 people :-). For us that was one of the many hilarious, peculiar things that were part of growing up in the Balkans.”

BONUS:  A photo of old Macedonian socks on display in the Peter the Great Museum of Anthropology and Ethnography (the Kunstkamera) in St. Petersburg, Russia: 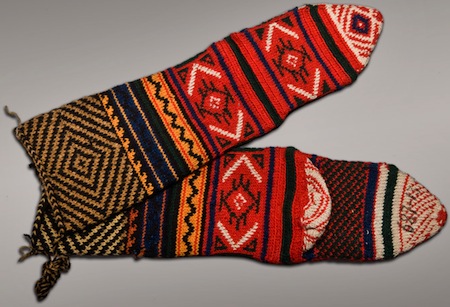