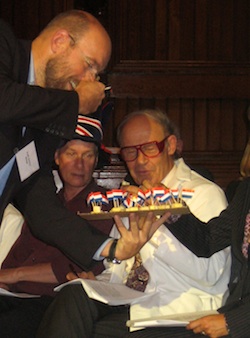 NAIROBI, Kenya—What do mosquitoes like more than clean, human skin? Stinky socks. Scientists think the musky odor of human feet can be used to attract and kill mosquitoes that carry deadly malaria. The Gates Foundation announced on Wednesday that it will help fund one such pungent project in Tanzania.

If they can be cheaply mass-produced, the traps could provide the first practical way of controlling malaria infections outside….

Dutch scientist Dr. Bart Knols first discovered mosquitoes were attracted to foot odor by standing in a dark room naked and examining where he was bitten, said Dr. Fredros Okumu, the head of the research project at Tanzania’s Ifakara Health Institute. But over the following 15 years, researchers struggled to put the knowledge to use. Then Okumu discovered that the stinky smell — which he replicates using a careful blend of eight chemicals — attracts mosquitoes to a trap where they can be poisoned. The odor of human feet attracted four times as many mosquitoes as a human volunteer and the poison can kill up to 95 percent of mosquitoes, he said….

Okumu received an initial grant of $100,000 to help his research two years ago. Now the project has been awarded an additional $775,000 by the Bill and Melinda Gates Foundation and Grand Challenges Canada to conduct more research on how the traps should be used and whether they can be produced affordably.

The 2006 Ig Nobel Prize in biology was awarded to Bart Knols (of Wageningen Agricultural University, in the Netherlands; and of the National Institute for Medical Research, in Ifakara Centre, Tanzania, and of the International Atomic Energy Agency, in Vienna Austria) and Ruurd de Jong (of Wageningen Agricultural University and of Santa Maria degli Angeli, Italy) for showing that the female malaria mosquito Anopheles gambiae is attracted equally to the smell of limburger cheese and to the smell of human feet.

Bart Knols has eagerly participated in many Ig Nobel events around the world, taking advantage of the attention from the Ig Nobel Prize to intrigue and educate audiences about malaria. Ruuard de Jong, now retired in Italy, has also participated in that way.