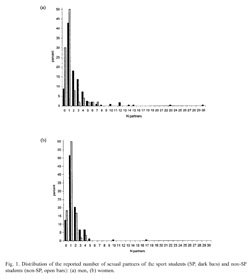 We investigated the relationship between involvement in competitive sport and self-reported numbers of sexual partners. Both male and female students who compete in sports reported significantly higher numbers of partners than other students, and within the athletes, higher levels of performance predicted more partners…. We discuss possible implications for the evolution of competitive sport, ritual fighting behavior, and the persistence of left-handedness.