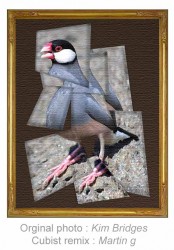 Professor Shigeru Watanabe and colleagues at Keio University, Japan, were the joint winners of the 1995 Ig Nobel psychology prize for their success in training pigeons to discriminate between the paintings of Picasso and those of Monet. Now professor Watanabe, presently Project Leader for Keio University’s Centre for Advanced Research on Logic and Sensibility has extended the study of avian art appreciation with his participation in a project probing pictorial preferences of Padda oryzivora – a.k.a. the Java Sparrow. Unlike the first study, in which the birds were trained, this time the birds were all complete artistic novices – enabling the following question to be experimentally tested : Do Java sparrows naturally prefer Cubism, Impressionism or traditional Japanese-style artworks? To find out, the experimenters constructed an extended art-gallery-like cage with three video screens installed along its length. Two of the screens showed slideshows of artworks from each of the three categories, and the third displayed an abstract pattern as a control. The seven java sparrows participating in the experiment were monitored over time to see which artworks they preferred to perch next to (with the assumption that this implied a preference for the art).
Results:

A second experiment used operant conditioning techniques to reveal the birds’ discriminative properties regarding the different artistic styles of the paintings – allowing the researchers to make the claim that : “This is the first report demonstrating reinforcing properties of visual artworks in non-human animals.”

The new research paper Discriminative and reinforcing properties of paintings in Java sparrows (Padda oryzivora) is published in the latest issue of the journal Animal Cognition, Volume 14, Number 2, 227-234.