What is the relationship between the colour of socks and their ability to generate static electricity? Those interested will find no better place to start their enquiries than the article: New Experiments and Obſervations Concerning Electricity, written by Robert Symmer, Eſq; F.R.S., back in 1759.
Symmer was an independent amateur Scottish investigator – or what was at the time called a ‘Natural Philosopher‘ – since the word ‘Scientist’ hadn’t been coined yet. Here is an extract from his notes: (see: Royal Society Phil Trans, Vol LI 340)

I took a pair of white ſilk ſtockings, and having warmed them at the fire put them both upon the ſame leg. 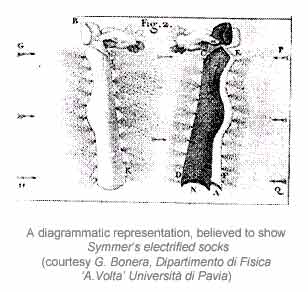 After I had worn them for about ten minutes I took them off, and pulled them aſunder, but diſcovered no ſigns of electricity in either. I did the ſame with a pair of black ſilk, but to no other effect.

I then proceeded to the deciſive trial.

I put a black and a white ſtocking upon my leg, and wore them likewiſe ten minutes. I waited with ſome impatience to ſee the ſucceſs of my experiment, and in return had the ſatisfaction of obvſerving, upon their being pulled aſunder, that each of them had acquired a ſtronger degree of electricity than I had before ſeen : they were inflated ſo much that each of them ſhewed the entire ſhape of the leg, and at the diſtance of a foot and a half they ruſhed to meet each other.

I went though the ſame experiment with worſted ſtockings, and found that, as in ſilk, nothing but the combination of black and white produced electricity.

Symmer correctly concluded that more experimental work was required in order to fully explain the puzzling results. It’s worth bearing in mind that, at the time, no-one had any more of an idea of how electricity really worked than he did.

…it is a matter that merits a more minute examination, we may hereafter take it up as an immediate object of enquiry ; with a view to determine, if light and colours have, of their own nature, a relation with electricity, and in what that relation conſiſts.