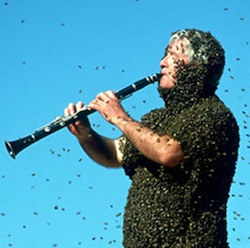 Professor Norman E Gary is the rare academic who plays clarinet while he is covered with live bees, and often in public.

An emeritus professor of apiculture at the University of California (Davis), Gary also plays Dixieland music in a human ensemble called the Beez Kneez Jazz Band. He generally goes solo for the bee-encrusted gigs. Hollywood has used Gary’s bee-wrangling talents, though seldom his clarinet, in more than a dozen movies. Among them: The X Files; Fried Green Tomatoes; Invasion of the Bee Girls; and Candyman: Farewell to the Flesh.

Several of Gary’s scientific activities involve vibration, a general physics phenomenon of which music is just a part. Gary has microwaved bees….

Here’s video of a bee-encrusted performance by Professor Gary: