A new study shows the spectacular nature of the fairly-recent calamity that befell big banks — and of a corresponding assessment made by an Ig Nobel Prize winner. The study is: 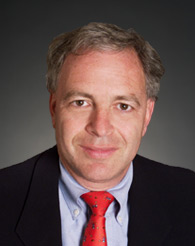 “One of the more memorable moments of last summer’s credit crunch came when the CFO of Goldman Sachs, David Viniar, [pictured here] announced in August that Goldman’s flagship GEO hedge fund had lost 27% of its value since the start of the year. As Mr. Viniar explained, ‘We were seeing things that were 25-standard deviation moves, several days in a row.’

Mr. Viniar, as an executive of Goldman Sachs, shared the 2010 Ig Nobel Prize in economics, which was awarded to the executives and directors of Goldman Sachs, AIG, Lehman Brothers, Bear Stearns, Merrill Lynch, and Magnetar for creating and promoting new ways to invest money — ways that maximize financial gain and minimize financial risk for the world economy, or for a portion thereof.

(Thanks to investigator Andy Roeberg for bringing this to our attention.)