Don Troop in the Chronicle of Higher Education reports yet another case of a mathematician committing a shocking act of violence: 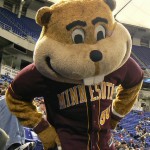 The year in college sports has brought us both mascot-on-mascot violence and mascot-on-fan violence.

Last weekend the tables turned when a University of Minnesota fan landed a couple jabs on Goldy Gopher, mascot for teams at the Twin Cities campus. 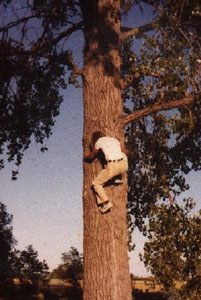 According to a witness quoted on the Web sites of The Minnesota Daily and Chicago Breaking Sports, Douglas P. Dokken, a math professor at the University of St. Thomas, in St. Paul, Minn., was watching a gymnastics competition when Goldy tapped him on the shoulder and mussed his hair. Mr. Dokken, who got his Ph.D. at Minnesota, apparently tried to ignore the attention, but the oversized rodent persisted, and the professor ended up losing his temper and thumping the mascot….

Professor Dokken’s web page shows a photo [reproduced here] of the professor climbing a tree. The site does not indicate whether that photo was taken prior to the mascot incident or subsequent to it. The web site does indicate that Professor Dokken tackles problems in boundary theory.

BONUS: The recent case of a different math professor urinating on a colleague’s door.