One Ig Nobel Prize winner (Chris McManus, biology prize 2002, for his study “Scrotal Asymmetry in Man and Ancient Sculpture“) reviewed a new book written by another Ig Nobel Prize winner (Daniel Lieberman, physics prize 2009, for analytically determining why pregnant women don’t tip over), in the February 17, 2011 issue of The Times Higher Education. Both Ig Nobel Prize-winning studies, by the way, were published in the journal Nature.

McManus, the reviewer, is himself an Aventis prize winner for Right Hand, Left Hand, a book based in wee part on his Ig-winning work. Lieberman’s book is The Evolution of the Human Head. Chris McManus’s review says, in part:

… Daniel Lieberman has written a wonderful and inspiring book about the human head’s evolution. 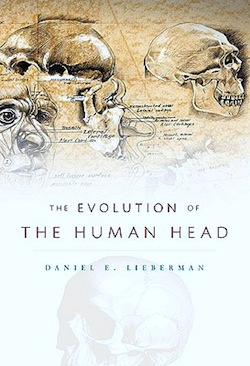 It is the sort of book that governments, in Britain at least, find dangerous: there is no immediate economic impact; industry or business would not know what to do with it; its 700-plus pages are densely written, oozing scholarship; it fearlessly distinguishes paedomorphosis from peramorphosis, and klinorhynchy from airorhynchy, but lightens the load with diversions on head-binding, the sewers of Paris, and following chocolate trails around fields by sniffing.One stands in awe at the work that has gone into it, the range of academic disciplines covered, the ability to take any feature of a head, however apparently trivial, and use measurement and comparison and theory and inference to extract so much. Such books are not produced in universities that ask professors each year whether they have earned their salary in teaching or research income, but in institutions that trust their scholars to produce work of the highest international quality. But Lieberman’s university is Harvard, so enough said. Finding a parallel is hard, but I was reminded of D’Arcy Wentworth Thompson’s masterpiece, published in 1919, On Growth and Form; of Julian Huxley’s Evolution: The Modern Synthesis (1942); and J.Z. Young’s The Life of Vertebrates (1950). Like them, this encyclopedic book is transformative.

Anatomy as a discipline – understanding the complex three-dimensional interrelations of the stuff that makes bodies – sank ever lower in the 20th century, as great 19th-century departments were absorbed into departments of applied molecular genetics. Dem dry, dry facts about dem dry, dry bones were seen as only relevant to surgeons or, increasingly, radiologists, whose ever more powerful scanners avoided any need to touch the soft, wet, pink and red stuff underpinning the ills that flesh is heir to. The morphological details in Lieberman’s book make it a direct descendant of Gray’s Anatomy, which Henry Gray published in 1858 just a year before Darwin’s On the Origin of Species appeared. Lieberman’s ruthless application of Darwinian principles to cranial anatomy makes his book thoroughly modern, each seemingly pointless detail of structure being shown, with a flourish, to be functional.

If a single word describes this book, it is integrative. The author integrates material from anatomy, physiology, physics, biomechanics, molecular and developmental biology, but brings all under the umbrella of evolutionary theory. What is became what is by changing what was, all the while surviving in an ever-changing environment. The many novel anatomical features make human heads unlike any other, even other great apes: a massive brain in a spherical vault, eyes below the frontal lobes, an external nose, a short mouth and tongue, a high larynx, omnivorous teeth with small canines, and eyebrows….

BONUS: Chris McManus writes an admiring review only if he admires the book. You might enjoy reading his review of a book he does not admire.