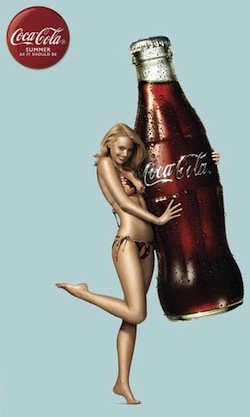 Despite the Ig Nobel Prize-winning (chemistry prize, 2008) research — done by groups on two continents — demonstrating that Coca-Cola is NOT an effective contraceptive, people still rely on it to prevent pregnancy. A report from a Vietnamese news source says [we present a rough Google machine translation here]:

Odd way of contraceptive use, young women get pregnant

Listen to your boyfriend read online said that Damascus coca water washing after sex can prevent pregnancy, Velvet (24 years, Hanoi) and try to follow. Not expected until business slowed down, visit, she was 7 weeks pregnant.

According to the Velvet, every time she is taking birth control pills or use condoms during sex.  But this time because the message said her boyfriend did not use preventive measures at all, just take the coke douches after sex. Consequently, she still get pregnant.

“Especially when the relationship to ovulation, the pregnancy rate is very high pass. All the block, outside intervention (shower, douche) are meaningless,” Dr. Dung said.

According to doctors, drugs as well as a spermicidal contraceptive methods, but the failure rate of up to 20%, more must be inserted into the vagina before intercourse. Moreover the water used to wash sugar fermentation can lead to vaginal infections.

Therefore, it is best to use birth control measures have been proven safe and effective.

In 2008, a group of scientists were awarded the Ig Nobel chemistry prize for finding “work” spermicidal Coca-Cola and some other beverages. But the researchers also confirmed it has no effect birth control because sperm swim very fast. Ig Nolbel honor real research, but funny that way.

* Name has been changed character.