The Got Medieval blog attempted, in piecemeal fashion, to track the origin on the Starbucks coffee company’s mermaid-ish logo: 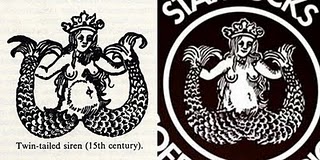 Here is the official history of the Starbucks logo, as found on Starbucks.com’s FAQ page.***

[…] We pored over old marine books until we came up with a logo based on an old sixteenth-century Norse woodcut: a two-tailed mermaid encircled by the store’s original name, Starbucks Coffee, Tea, and Spice.

… Now, here’s the problem with this tidy little origin story…. She’s from an early German printed book, Das Buch von einer Frawen genant Melusina, a translation of Jean d’Arras’s Roman de Melusine, a book which could very plausibly be called one of the first best-sellers of the the early years of the printing press…. there was almost certainly no “sixteenth-century Norse woodcut” floating around Seattle in 1971.  It’s far more likely that three businessmen and coffee afficianados searching for a symbol for their new coffee shop in Pike Place Market turned to the American edition of The Dictionary of Symbols–which, incidentally, was first published in that same year, 1971.