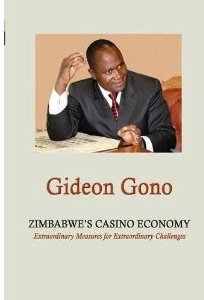 HARARE, Zimbabwe – Western visitors to Zimbabwe are looking for zeros. They’re snapping up old, defunct Zimbabwe bank notes, most notably the one hundred trillion Zimbabwe dollar bill, as an economic souvenir. The one hundred trillion Zimbabwe dollar bill, which at 100 followed by 12 zeros is the highest denomination, now sells for $5, depending on its condition. That bill and others — among them millions, billions and trillions, were abandoned nearly two years ago, when the American dollar became legal tender in the hopes of killing off the record inflation that caused all those zeros….

(Thanks to investigator Daniel Sterman for bringing this to our attention. Sterman points out that the AP article itself contains some rather innovative quasi-calculations.)

Gideon Gono, governor of Zimbabwe’s Reserve Bank, the man responsible for creating those bank notes, was awarded an Ig Nobel Prize in mathematics in 2009 for giving people a simple, everyday way to cope with a wide range of numbers — from very small to very big — by having his bank print bank notes with denominations ranging from one cent ($.01) to one hundred trillion dollars ($100,000,000,000,000).