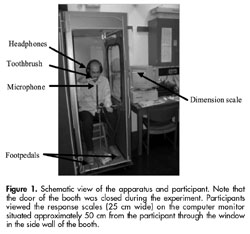 “The Role of Auditory Cues in Modulating the Perception of Electric Toothbrushes,” Massimiliano Zampini, S. Guest, and Charles Spence, Journal of Dental Research, vol. 82, no. 11, 2003, pp. 929–32. Zampini and Spence were awarded the 2002 Ig Nobel Prize in nutrition for electronically modifying the sound of a potato chip to make the person chewing the chip believe it to be crisper and fresher than it really is. In this 2003 study they report [AIR 16:2]:

“We investigated whether the perception of an electric toothbrush might also be affected by the sound that it makes. Participants were required to make stereotypical brushing movements with a standard electric toothbrush while they rated either the pleasantness or the roughness of the vibrotactile stimulation they felt on their teeth. The results demonstrate that the perception of the sensations experienced during toothbrush use were systematically altered by variations in the auditory feedback elicited by the brushing action.”