Telephone interview with Andre Geim following the announcement of the 2010 Nobel Prize in Physics, 5 October 2010. The interviewer is Adam Smith, Editor-in-Chief of Nobelprize.org (which also has an audio recording on their site.) We take the liberty of reproducing here the last part of that interview:

AS] Thank you. I should just finish by asking, since you’re the first Laureate, to my knowledge, to have been awarded an IgNobel Prize and a Nobel Prize, do you plan to …

[AG] To my knowledge too!

[AS] Do you plan to display them together in the office?

[AG] Ah. Unfortunately, the IgNobel Prize … I have somewhere the IgNobel Prize in my office. But, it’s not really something, ok, visually attractive. OK, but speaking seriously, I’m actually quite proud of my IgNobel Prize – not because of IgNobel Prize  – it’s a more subtle association. Essentially, yeah, IgNobel Prize is given for something which forces people to smile. And, that was always the idea behind the flying frog, which we shared with another distinguished scientist, Professor Sir Michael Berry, known for his ‘Berry phase’. And, the second thing which with Nobel Prize, it’s quite obvious that, if you are offered, I’m not aware about anyone who rejected an offer of Nobel Prize, ok. Although history might be long.

[AG] Yeah, ok, so, so … But, with IgNobel Prize they ask you a few weeks in advance whether you are ready to accept this prize or not. So we considered hard and, at the end, we had courage to accept this IgNobel Prize, yeah. So, I’m proud that I had enough courage to do that and I do not regret accepting it.

[AS] It certainly doesn’t seem to have done you any harm. On the contrary, I suspect.

[AG] Yeah, with the benefit of hindsight! Ha!

BONUS: The photo below was taken at the 2000 Ig Nobel Prize ceremony. The central characters are Andre Geim and Ig Nobel minordomo Julia Lunetta. 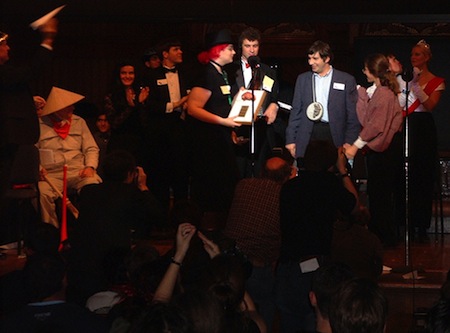