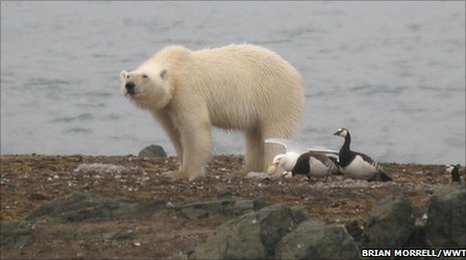 There is news about polar bears, barnacle geese and their eggs. BBC News reports:

An Arctic expedition has confirmed fears that polar bears are preying on the eggs of barnacle geese that migrate to the Solway Firth each winter. During a recent trip, scientists discovered evidence of bears eating thousands of eggs.
The bears have turned to the eggs after being stranded on land in the summer months as a result of diminishing ice.

The accompanying picture depicts a polar bear, a couple of geese and a gull, a glaucous gull to be precise. Well chosen, this Arctic scene, but a closer look reveals that the gull – not the bear – is preying on an egg.