A series of Italian research studies suggest that eating pizza might do good things for a person’s health. These benefits show up, statistically speaking and seasoned with caveats, among people who eat pizza as pizza. The delightful statistico-medico-pizza effects do not happen so much, the researchers emphasise, for individuals who eat the pizza ingredients individually. 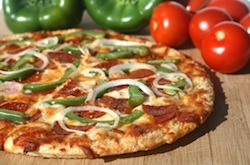 Back in 2001, Dario Giugliano, Francesco Nappo and Ludovico Coppola, at Second University Naples, published a study in the journal Circulation called Pizza and Vegetables Don’t Stick to the Endothelium. The thrust of their finding was that, unlike many other typical Italian meals, pizza does not necessarily cause clogged blood vessels (atherosclerosis) and death.

Silvano Gallus of the Istituto di Ricerche Farmacologiche, in Milan, has cooked up several studies about the health effects of ingesting pizza….