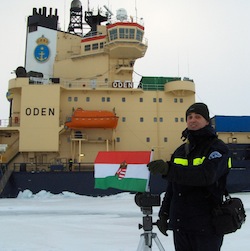 He and five colleagues wrote a study called An Unexpected Advantage of Whiteness in Horses: The Most Horsefly-proof Horse Has a Depolarising White Coat, which they published recently in the Proceedings of the Royal Society.

They experimented with a small number of sticky horses and a large number of horseflies (of the variety called tabanids). The horses were sticky because the scientists had coated them with “a transparent, odourless and colourless insect monitoring glue [called] Babolna Bio mouse trap“….