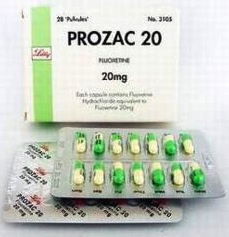 Prozac has varying effects. Peter Fong and colleagues contributed to the happiness of clams by giving them Prozac (for which Fong was awarded an Ig Nobel Prize in 1998). However, National Gerographic News reports, about shrimp, that:

To mimic conditions in the wild, scientists exposed the estuary-dwelling shrimp Echinogammarus marinus to the antidepressant fluoxetine at levels detected in average sewage-treatment waste. Fluoxetine is the key ingredient in the drugs Prozac and Sarafem.

Shrimp normally gravitate toward safe, dark corners. But when exposed to fluoxetine, the animals were five times more likely to swim toward a bright region of water, the team discovered.

“This behavior makes them much more likely to be eaten by a predator, such as a fish or bird,” said study co-author Alex Ford, a biologist at U.K.’s University of Portsmouth.

(Thanks to investigator Jesse Eppers for bringing this to our attention.)

BONUS: Neurodojo points out that “shrimp” is not the best word to use here. Better to use the proper name: amphipods.