Mathematical theory describing the problem of four-legged wobbly tables stretches back at least as far as 2005, when a paper on the subject of  “The Intuitive Table ‘Theorem’ “, was published in the journal Viniculum. [subscribers only] 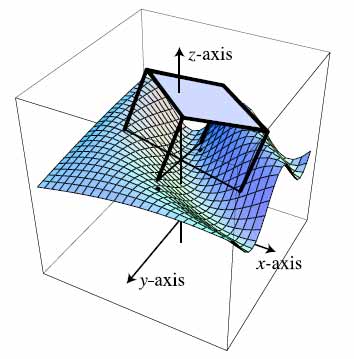 The theorem ran thus: “By rotating a square table over uneven ground, you can ensure that all four legs touch the ground”. Suggesting that, theoretically at least, any wobbling can be eliminated by studious rotation. A few months later, the same authors, Burkard Polster, Marty Ross and QED (the cat) published an update, which is available online, see  Turning the tables: feasting from a mathsnack.(Viniculum, Volume 42, number 4. Nov. 2005). The new paper further refined the findings, pointing out, amongst other things, that the theorem does not hold for so-called ‘cliff’ scenarios. In other words where one (or more) of the legs is entirely unsupported – for example when hanging over a cliff or positioned over a deep hole. Thus the theorem was refined to read “A mathematical table can always be balanced locally, as long as the ground function g is continuous”
Then, in 2007 the theorem was consolidated still further – this time in the journal The Mathematical Intelligencer (Volume 29, Number 2 / June, 2007). This new article, entitled ‘Before carrying out these transformations, make sure the glasses are not filled too full’ drew attention to the fact that if you shorten one of the legs of a real-life four-legged square table, it will consistently wobble if you set it down on a planar surface – no amount of turning or tilting will fix this problem.