“Viewing a stressful soccer match more than doubles the risk of an acute cardiovascular event.” 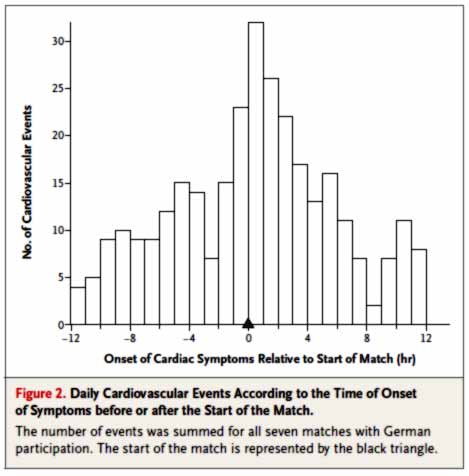 This disturbing conclusion was published in a 2008 study based on data regarding 4,279 Bavarian medical emergency cases. The number, and character, of adverse cardiovascular events which occurred during the FIFA World Cup (held in Germany from June 9 to July 9, 2006) were compared with those in a control period. Not only was there double the incidence of cardiac problems, but their time of onset starkly correlated with the beginning of the matches. [see graph at right]

“Our results show a strong and significant increase in the incidence of cardiovascular events (including the acute coronary syndrome and symptomatic cardiac arrhythmia), in a defined sample of the German population, in association with matches involving the German team during the FIFA World Cup held in Germany in 2006.”

But now, soccer enthusiasts who might have been concerned about The Final Whistle have, it seems, been granted some extra time.

For a new study on the same subject – but this time conducted in Italy – found no such effects. The research team’s paper, entitled ‘It is just a game: lack of association between watching football matches and the risk of acute cardiovascular events’ is due for publication in the International Journal of Epidemiology. The investigators studied 25,159 hospital admissions for acute myocardial infarction (AMI) among the Italian population during three international football competitions: the World Cup 2002, the European Championship 2004 and the World Cup 2006. And found no significant links. They therefore conclude : “The cardiovascular effects of watching football matches are likely to be, if anything, very small.”