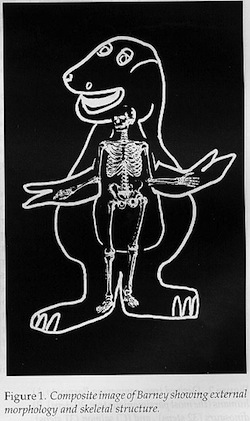 Ed Theriot, co-author of the classic article “The Taxonomy of Barney“, writes after seeing a web site about Darwin’s beard:

Musing on stuff that is not necessarily clearly connected to anything else:

My dad and I were duck hunting one morning in South Louisiana. A cold front had just passed. The sun was not yet up. The blue northern high pressure system was centered right over our blind. The water was mirror calm. It was one of those rare nights on the Gulf coast in which the air was crystal clear. Nature had stopped. You could see every star in the sky and every star was reflected back from the water. Even at night, the sky was almost blue. We were talking philosophy and somehow the discussion got to “Would you rather finish second in the 100 yard dash in the Olympics or be Tiddly Winks World Champion?” We both agreed we would rather be Tiddly Winks Champ.

That is how I feel about Barney. In all other endeavors, excluding our personal lives (we are, after all, number one in the hearts of our families — well, maybe [my co-author Earle Spamer is], our competition likely outshines us in some way.

However, we will always be remembered for, and linked to, Barney.