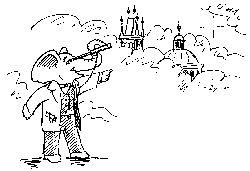 On a hot night in August, while strolling in Prague, Horton the elephant peered through the fog.

With his portable telescope tied on a string
He looked at the heavens and spotted… a thing!

So Horton stopped walking and stared at the spot.
“That’s funny,” thought Horton, “It was there, now it’s not.”
Then he saw it again! Just a faint bit of fuzz
He certainly thought it wasn’t there—but it was!
“I’ll name it!” said Horton, “But what is it? Where?”
He looked and he looked. He could see nothing there
But small speck of ice floating far past the air.

“I say!” murmured Horton. “Stuff my trunk in a sock!
I’ve spotted a terribly far-away rock!
So you know what I think? I think that there must Be a splendid new name for this lump of star-dust.
Even though it is quite a diminutive size,
Too small to be seen by an elephant’s eyes…”