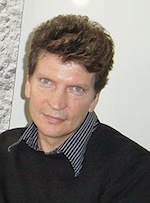 What with lots of claims that the brain is the most complex object in the universe, there are complex squabbles about whether and how brainy people can build brains of their own. Investigator Brian Hanley alerts us to a brouhaha between two do-it-yourself-brain builders. IEEE Spectrum’s Tech Talk explains:

IBM announced that they had simulated a brain with the number of neurons and synapses present in a cat’s brain…. There are as many theories of mind as there are researchers working on it, and in some cases there is a real grudge match between the theorists… but it seems that none of these are more bloody than the one between IBM Almaden’s Dharmendra Modha and EPFL’s Henry Markram…. Markram [whose ghoulish home page photo appears here] sent the following letter:

“You told me you would string this guy up by the toes the last time Mohda made his stupid statement about simulating the mouse’s brain.. I am absolutely shocked at this announcement. Not because it is any kind of technical feat, but because of the mass deception of the public…”