As this US Library of Congress document points out

“The ramp’s flavor, though sweet with a hint of garlic, is accompanied by a potent odor so objectionable [that] school children with ‘ramp odor’ were known to have been excused from school for a few days.” 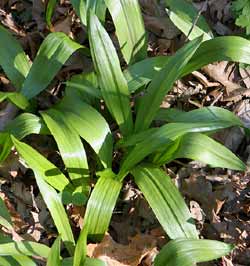 For those outside the Appalachian area, who may be unfamiliar with ‘ramps’ they are : Allium tricoccum Ait – and the 2010 ramp-eating festival season is fast approaching.
Examples here : [1] [2] [3]
Though ramps are common in many regions, there is some concern regarding over-harvesting during the season. See this 2004 research article in Biological Conservation. And in some areas, like Quebec, it is already illegal to pick them. Though you can of course grow your own.
Either way, those untroubled by the possibility of ramp-odor can visit a website devoted enirtirely to them – which includes recipes for ramp-based cuisine such as the Bloody Stinkin’ Mary