“Exaggerated celebrations after making a goal, such as sliding, piling up, and tackling a teammate when racing away, can result in serious injury.” 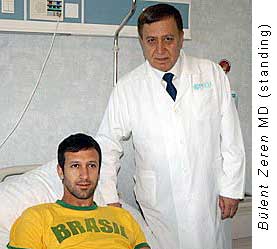 Bülent Zeren, MD from the Center for Orthopaedics and Sports Traumatology, Karsiyaka, Izmir, Turkey, and Haluk H. Öztekin, MD at the Clinic of Orthopaedics and Traumatology, Atatürk Research and Training Hospital, Izmir, Turkey, have undertaken one of the very few formal scientific studies into ‘Score-Celebration Injuries’ (SCIs)
SCIs – which can, and sadly do, occur both at professional and amateur soccer matches – happen when players perform dramatic on-field feats of celebration after scoring a goal. In a study which followed 152 players over two seasons, nine SCI cases were found. With injury-causing manoeuvres such as …
• sliding (prone or supine) and sliding while kneeling (5 cases)
• piling up on jubilant teammates (3 cases), and
• being tackled while racing away (1 case )

Notes:
• Most SCIs occurred during the second-half of play.
• 6% of the 152 players evaluated had injured themselves via SCIs
• Rival team players were not usually responsible.
• The mean duration for recovery was 6.2 weeks.

The doctors therefore suggest that :

“… coaches and team physicians should teach self-control and behavior modification to minimize the risk of such injuries.”

‘Score-Celebration Injuries Among Soccer Players. A Report of 9 Cases’ was published in the American Journal of Sports Medicine – August 2005; 33 (8)