“Plants grown in space have not produced fruit without astronaut intervention, which raises the question, how do you pollinate plants in space?” 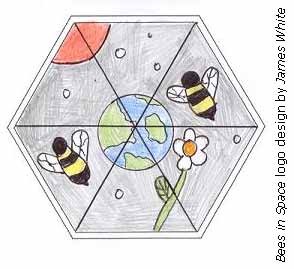 The answer maybe provided by the ‘Bees in Space’ project, organised by the Royal Melbourne Institute of Technology, Australia. According to their 2006 profile document ‘Bees in Space: Creating a buzz about space science’ the plan is to “ … work with scientists and engineers to investigate an effective pollinator for a micro gravity greenhouse and develop an ecosystem capable of producing food to sustain a human presence on Mars.” The effective pollinators (viz. bees) will be investigated at a specially constructed ‘Mars Analogue‘ greenhouse in the desert near Arkaroola, Australia.
Progress has been slow since 2006 however – the Arkaroola Mars Analogue site (a.k.a. Mars-Oz) has yet to be constructed, and all Improbable’s attempts to contact the Bees in Space project have failed [mailbox full].
Improbable has managed to track down the latest news though (despite the broken link on the Bees in Space website). Although no bees have yet been launched, the project’s newly designed logo (see pic) was blasted towards* space by a Zuni surface-to-air missile at the remote Woomera Rocket Range in the middle of the Australian desert at 0605 hrs on June 8th 2008 – and returned later by parachute.

* The press release uses ‘towards’ rather than ‘into’.