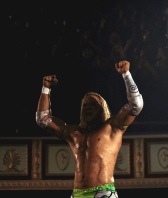 I recently read a fine review of the movie  “The Wrestler” by Bob Calhoun, a former pro wrestler himself, who wrote, “Ever since my days of being in the wrestling show, I can’t get through a Home Depot without checking out the prices of particle board picnic tables and steel folding chairs.” This came shortly after having recently seen [Ig Nobel Prize winner and] sword swallower Dan Meyer’s short film about purchasing, swallowing, and then returning a set of garden shears (on the grounds that they “taste funny”) to a similar store. I have now learned of what is called the “DIY BDSM” movement, in which people interested in kinky sex purchase their own raw materials, as it were, and built their various devices of consensual torment at home. I am now extremely nervous to enter my local hardware store. How many of my fellow customers are actually engaged in the process of home improvement as it is traditionally understood? And what thoughts might they entertain of me? This is particularly problematic as I am in need of some dowel rods to complete a crafts project, not to mention some chains for my tires.