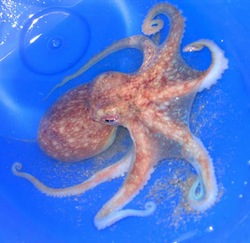 So far as we’re aware, the project described in this July 2008 Scientific American report is the only one to even claim to investigate the question of handedness, or tentacled-ness, in octopuses, or octopi.

In an attempt to find out if octopuses are right- or left-handed, er, tentacled, scientists from the Sea Life Center in England, have provided 25 of the beasts with colorful Rubik’s Cubes to play with in the center’s aquariums across Europe. Many animals in nature are known to favor one appendage, but researchers are unsure whether that holds true for the eight-armed octopus.

(Thanks to Chris McManus for bringing it to our attention). If you know of a more rigorous study, please tell us about it.